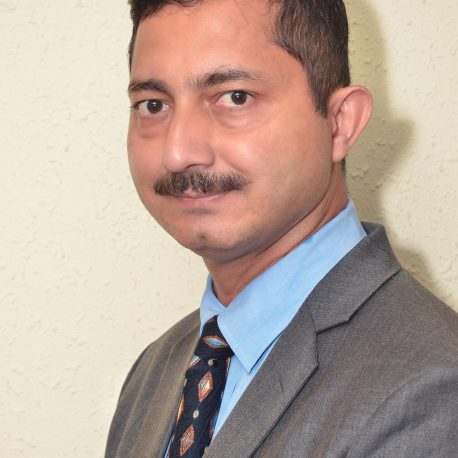 Director of the Maritime Research Centre (MRC) under the Indian Maritime Foundation, Pune

Arnab is a researcher, maritime strategist and an entrepreneur. He is presently the Director of the Maritime Research Centre (MRC) under the Indian Maritime Foundation, Pune that is working on a unique concept of Underwater Domain Awareness (UDA) as its main focus. He is a visiting Professor at the Defence Institute of Advanced Technology (DIAT), Pune,. He also runs his own company M/S Nirdhwani Technology Pvt Ltd that provides consultancies and services for high end maritime security solutions and marine conservation support. He advises start-ups on underwater technology solutions and defence strategies.

Arnab joined the Indian Navy in 1990 as a cadet and was commissioned as an electrical officer in 1994. He has served on multiple frontline ships of the Navy and Coast Guard as an Electrical Officer, looking after the entire electrical and electronics, weapons and systems onboard. He has served as the Project Manager (R&D) at the Underwater Ranges (2009-2012) managing the underwater stealth for Naval Warships. He took retirement from the Navy in Jul 2015.

He was deputed to IIT Delhi in 2001 for his Masters in Underwater Electronics and subsequently was appointed as the Project Officer at IIT Delhi to manage the Underwater R&D for Navy. During his tenure of five years in IIT Delhi, he was involved in conceiving multiple projects for the Indian Navy including a Comprehensive Ocean Area Surveillance Technology (COAST). The COAST is a multi-dimensional surveillance and monitoring system with state-of-the-art networking to provide a comprehensive maritime security solution for India. He delivered multiple technology transfers for the strategic submarine project related to underwater systems and algorithms. He also completed his PhD from IIT Delhi in 2007 in underwater signal processing.

Arnab was managing the sensor deployment and acoustic analysis for fresh water dolphin passive acoustic monitoring at the Ganges river dolphins in 2007. A project jointly by University of Tokyo, IIT Delhi and WWF India and he was also invited to Tokyo university in 2014 as a visiting researcher to participate in design and development of passive acoustic monitoring systems for fresh water dolphins.  He was also at the Acoustic Research Laboratory of the Tropical Marine Science Institute at the National University of Singapore in 2015 for year to understand underwater technology development from a global perspective.

Arnab has more than 70 publications on underwater technologies and maritime strategies. He writes on maritime strategy from a technology perspective focused on the Indian Ocean Region (IOR). His book titled “Marine Eco-concern and Its Impact on the Indian Maritime Strategy” address the unique challenges of UDA in the IOR and how stakeholders need to pool resources and synergise efforts to ensure safe, secure and sustainable growth for all in the IOR. He has been actively pursuing the formulation of regulatory framework for Acoustic Habitat Degradation in the Indian Ocean Region.

Marine Eco-concern and its Impact on the Indian Maritime Strategy

The marine eco-system has rich bio-diversity but is much less understood. The efficient propagation of acoustic signals in the underwater medium also means that the marine species specifically the marine mammal’s use sound for multiple biologically critical functions like foraging, communication, navigation, finding mates, avoid predators, etc. The increasing human activities in the maritime domain are directly impinging on the soundscape of the ocean medium. The increasing anthropogenic noise is causing serious habitat degradation of the marine ecosystem. The Indian Ocean Region (IOR) due to its strategic relevance is emerging as a hotspot for maritime activities in the 21st century and the unregulated increase in the anthropogenic noise is a cause of serious concern. The geo-politics and the geo-economics of the IOR make it extremely complex to plan any conservation initiative. To add to that the tropical shallow waters of the IOR ensure suboptimal performance of the sonars deployed in the region, so acoustic monitoring of the marine mammals population and also habitat assessment is highly limited.

The concept of Underwater Domain Awareness (UDA) proposed by the speaker, addresses the resource requirement issue for any conservation initiative. The pooling of resources by all the four stakeholders namely the national security apparatus, blue economy entities, environmental regulators including disaster management authorities and the science and technology providers under the UDA concept is unique and can provide a sustainable way ahead for the developing economies in the region. The maritime strategy perspective has been discussed to address the interplay between the stakeholders and how to bring regulatory framework overcoming the development vs. conservation debate, very germane in a developing region like the IOR. The Indian Maritime Strategy (work in progress) formulation does get substantial inputs through the UDA concept to comprehensively address issues unique to the IOR. India with its strategy location in the IOR could play a leadership role in addressing the critical marine eco-concern highlighted in the presentation. A detailed perspective of the “Marine Eco-concern and its Impact on the Indian Maritime Strategy” has been presented and effectively dealt with in a recent the book by the speaker. The work aims to create awareness among the stakeholders, policy makers, marine experts, etc. and provide a broad way ahead towards a safe, secure and sustainable growth model in the IOR.