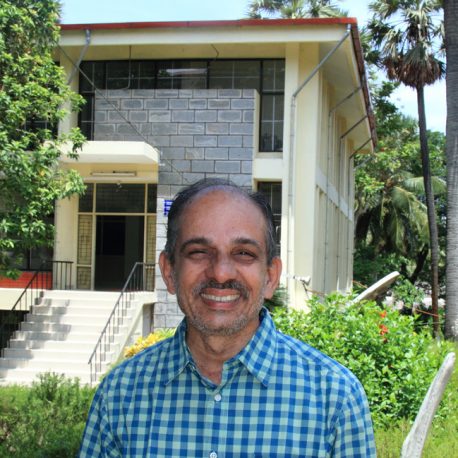 Ramachandra Bhatta is a marine resources economist and has worked with University of Agricultural Sciences and Karnataka Veterinary, Animal and Fisheries Sciences University College of Fisheries, at Mangalore for 40 years. He was Division Chair and Scientist G at the National Centre for Sustainable Coastal Management, Ministry of Environment, Forests and Climate Change during 2013-15 and an ICAR- Emeritus Scientist during 2016-18. Dr. Bhatta led marine conservation research team as Environmental Economist to Maldives, under the South Asian Network for Development and Environmental Economics (SANDEE) Kathmandu during 2009-10.  He has been focusing on coastal conservation planning for many coastal states with focus on Karnataka for integration of wetlands and coastal zone management.  He currently leads an interdisciplinary team on the preparation and implementing an action plan on coastal conservation, and sustainable livelihoods for building community resilience under Integrated Coastal Zone Management (ICZM) a World Bank supported Project. Bhatta is also a member of Research Review Panel of the Karnataka Biodiversity Board, Bangalore and an Adjunct Faculty with ICAR- National Academy for Agricultural Research Management (NAARM) Hyderabad.

Ramachandra Bhatta was a post-doctoral fellow at the Florida International University Miami, holds a PhD in Economics from Mangalore University and M. Sc from the University of Hull, UK.

Blue Economy covers a wide range of interlinked established and emerging sectors such as fisheries, aquaculture, fish processing industry, ports, coastal tourism; marine extraction of oil and gas and maritime transport. Under the emerging sectors, offshore wind energy; ocean energy; and biotechnology. The “blue economy” concept seeks to promote economic growth, social inclusion, and preservation or improvement of livelihoods while at the same time ensuring environmental sustainability. A number of services provided by ocean ecosystems, and for which markets do not exist, also contribute significantly to economic and other human activity such as carbon sequestration, coastal protection, waste disposal and the existence of biodiversity.   In response to the over exploitation of commercial fisheries, many countries have adopted policies that restrict the numbers and size of fishing vessels. However, limiting the fishing effort or capacity has been a controversial subject since this policy appears to cause unemployment in fishing communities. The Convention on Biological Diversity (CBD,1993) identifies mariculture as one of the fastest growing food industry. However, CBD cautions the disadvantages of using high nutrients, antibiotics, the disposal of mariculture wastes, accidental release of alien species, transmission of diseases to wild stock, and the displacement of local communities. The studies show that the shrimp farming which gained popularity during 1990s-2000 could not be regulated by using water Act 1974 and also Environmental (Protection) Act 1986 and did not address the problems of degradation of coastal ecosystems. The draft mariculture policy of the Government of India.

In 2014 Government of India notified access and benefit sharing (ABS) rules which has relevance to marine bio-resources. Any person who intends to access any biological resource including marine bio resources and /or traditional knowledge should seek permission from the biodiversity board. If the buyer is a trader / manufacturer the benefit sharing obligation will be on buyer and in the range of 1-3% of the purchase price of the bio-resource.

According to MOEF & CC the minimum temperatures may rise by 2.0o C to 4.5o C and the maximum temperature is likely to rise by 1o C–3o C. Rainfall variation from 935±185.33mm to 1794± 247mm, which is an increase 6%–8% with respect to the1970s. The numbers of rainy days are likely decrease along the entire Western coast, including in the Western Ghats. The projected number of cyclonic disturbances along the coasts in the 2030s is likely to decrease with respect to the 1970s. However, cyclonic systems might be more intense in the future. The sea level along the Indian coast has been rising at the rate of about 1.3mm/year on an average.  The increase in sea level rise could increase the risks of erosion, flooding and other disasters. Global Climate Change and Vulnerability Index 2011 ranked India as the second extreme risk country after Bangladesh. The Govt of India (2010) reported that 76 percent of Indian coast line of 7500 km is susceptible to cyclone hazards. Coastal tourism is being promoted by all coastal states including Karnataka as a means to promote sustainable development and to utilize the coastal ecosystem services for recreational purposes. Karnataka beaches have many religious shrines which could be converted into a major source of revenue. Large investments are needed for underwater explorations and cruise tourism in places such as Karwar.