Javascript on your browser is not enabled. Siddharth Chakravarty – Moving Waters Film Festival 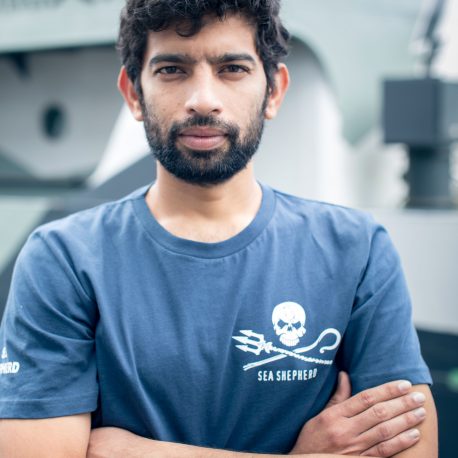 Siddharth Chakravarty has been at sea since 2001. He spent a decade working in the merchant navy as a navigator. After having spent the formative years of his career on the world’s oceans, he chose to have a more meaningful interaction with them; one that would allow him to give back something for their survival. He looked for areas where he could re-purpose his skill set and proactive marine conservation seemed like the perfect option.

Beginning in 2011 since this new start, he has spent many months on the high-seas with Sea Shepherd Global, tackling poaching and working through the loopholes in international conservation law, to bring much needed protection to the oceans. The trans-national nature of fishing, spanning across the planet, has created a perilous situation that threatens the future of this planet.

Over the years, he has chased whale poachers in Antarctica, patrolled the fishing season in the Mediterranean Sea, assisted with at-sea inspections in the Pacific Ocean, pursued and shut-down illegal toothfish vessels in Southern Ocean and chased illegal fishing vessels back to China.
Siddharth Chakravarty has headed Sea Shepherd Global’s Taskforce to Combat Illegal, Unreported and Unregulated Fishing for Asia and Oceania. His current work involves an array of marine conservation measures that combine at-sea enforcement with ocean policy and law,.

He has recently begun investigating human-rights abuses in the fishing industry through the global labour supply chain, working with researchers to study value addition to the seafood industry and liaising with governments and other NGOs to build cross-border and inter-agency cooperation to end the illegality on the world’s oceans.

His recent endevour, Enforceable Oceans, juxtaposes activism alongside academia to create a platform to assimilate ideas with the aim to initiate conversations, inform people and influence policy for the future of our oceans.