Javascript on your browser is not enabled. Tiasa – Moving Waters Film Festival 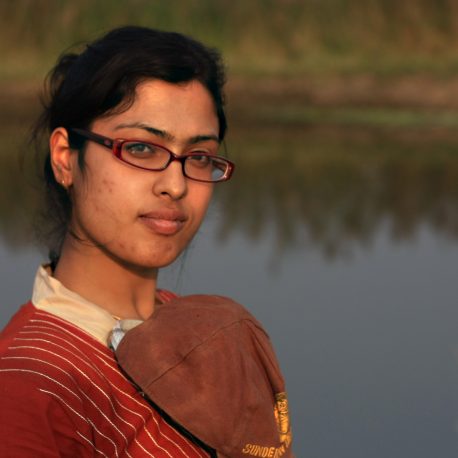 Tiasa Adhya is co-founder of The Fishing Cat Project (established in 2010), a partner project of Small Wild Cat Conservation Foundation (https://smallcats.org/) – the longest running research and conservation project on the wetland felid. She is part of the The Fishing Cat Working Group – an international cohort of  ecologists and conservationists working together on the threatened species and co-wrote a document during The First International Fishing Cat Symposium, 2015 to guide global conservation strategies. Tiasa also voices her opinion on ecological and conservation issues though articles in various popular publication platforms. In 2016, she was awarded Nari Shakti Puruskar (the highest civilian award for women in India) in recognition of her conservation work by the-then president of India, Mr Pranab Mukherjee.

Talk Synopsis – Cat of the ‘Ephemerals’ – Prisoner of Contradictions

The Fishing Cat is an inhabitant of dynamic ecotonal wetlands – land and water transition zones with an ‘ephemeral’ presence of water. Natural riparian vegetation are perhaps the most productive ecosystems on the planet yet are the most threatened. In India, for instance, 98% wet grasslands of the Terai were converted ever since Green Revolution. Intensive aquaculture and urbanisation also threaten these lesser known habitat. Seasonally inundated areas and swamps are considered to be wetlands in conservation policies yet these are the most converted due to their designation as ‘wastelands’ in development policies. In addition to introducing this unique cat to the audience, Tiasa’s talk will focus on the contradictions in policies that is the main driver of habitat loss of the Fishing Cat and its sympatric species.